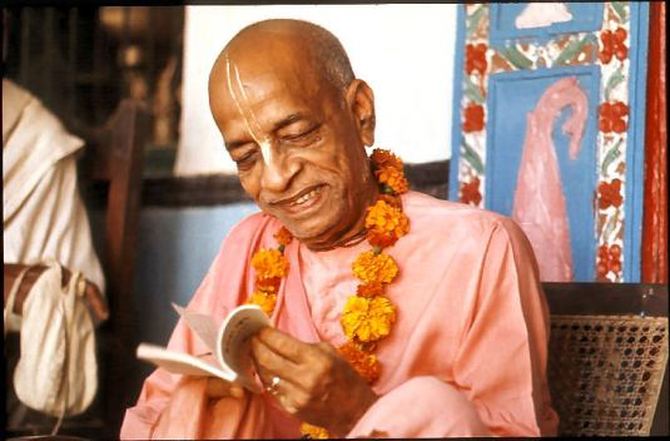 Lets take a look at this example, of how the books of His Divine Grace A.C. Bhaktivedanta Swami, are being changed by our so-called leaders and intellectuals. (Note the Bold Letters below is done by me to indicate the changes.)

"Even if one thinks that there are many pseudo devotees or nondevotees in the Kṛṣṇa Consciousness Society, still one should stick to the Society; if one thinks the Society’s members are not pure devotees, one can keep direct company with the spiritual master, and if there is any doubt, one should consult the spiritual master. However, unless one follows the spiritual master’s instructions concerning the regulative principles and chanting and hearing the holy name of the Lord, one cannot become a pure devotee. By one’s mental concoctions, one falls down. By associating with nondevotees, one breaks the regulative principles and is thereby lost."

This example is clearly showing, that BBTI is of the opinion, that they can change and add things, Srila Prabhupada never said, as they fancy. They concoct words and meanings and make it seem, that it is Srila Prabhupada's words. When we contemplate Srila Prabhupada's exalted position, the danger of changing his books, when His Divine grace is no longer present, to approve is obvious.

I
Prabhupada: “We have to do things now very dexterously, simply we have to see that in our book there is no spelling or grammatical mistake. We do not mind for any good style, our style is Hare Krishna, but still, we should not present a shabby thing. Although Krishna literatures are so nice that, even if they are presented in broken and irregular ways, such literatures are welcomed, read and respected by bona fide devotees.” (Letter to Satsvarupa dated 1-9-70)
Prabhupada: "There is a verse in Srimad-Bhagavatam that a book or poetry in which the Holy Name of Krishna is depicted, such language is revolutionary in the matter of purifying the material atmosphere. Even though such literature is presented in broken language or grammatical inconsistency or rhetorical irregularity, still, those who are saintly persons adore such literature. They hear such literature, and chant it and adore it, simply because the Supreme Lord is being glorified in this literature. In other words, we are not meant for presenting any literary masterpieces, but we have to inform people that there is a fire of maya which is burning the very vitality of all living entities, and they should guard against the indefatigable onslaught of material existence. That should be our motto." (Letter to Krsna dasa  --  Los Angeles 13 February, 1969)

Vyapaka Dasa: "Do you have explicit instructions from Srila Prabhupada authorizing you to make post-samadhi changes to his books?"
Jayadvaita Swami: No.

(from published email correspondence between Jayadvaita Swami and Vyapaka Dasa)